Items Available: 27
The word ‘standard’ in the 18th century meant what we today generally refer to as a flag. The purpose in the late 1700’s for a standard was exactly what it was in the centuries of warfare before that time – to signify the location of the rally point and where to organize around the leaders. Looking across the battlefield, soldiers knew where to go and where to find the commander based on the standard unfurled.

George Washington’s Standard or Washington's Position was thus an unquestionable indication of his presence during a battle or among soldiers at camp. Unique to him, this almost rectangular flag with a light blue background and 13 white stars likely inspired confidence to troops under his command.

Legend holds that Washington himself designed the flag; the arrangement and construction of the stars as well as its size lend credibility to that legend. At 27.5 inches by 35.5 inches, Washington’s Standard was smaller than the regimental flags. Washington likely intended to signify what became his later public position that the conquering general would not be above the civilians he served in war. However, the light blue color represented his authority and he was often depicted wearing a light blue sash across his formal military uniform.

Interestingly, the white stars on Washington's Standard are not the triangular shape we see on traditional flags. Instead, they are unique six pointed stars comprised of three intersecting lines. The heraldic stars are arranged in a consistent 3 x 2 x 3 x 2 X 3 pattern but note the uniqueness of each star’s intersecting lines which our patch depicts very well. This is thought to represent stars of a constellation with their varying sparkle, orientation, and light.

Our Washington’s Standard patch represents the personal position of one of the most beloved leaders of a free and independent people and brings a rare piece of history to your patch collection. 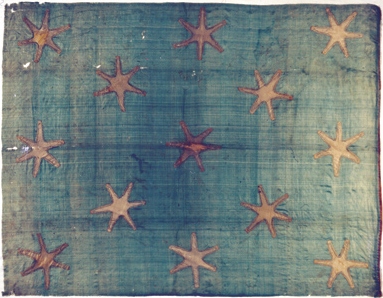